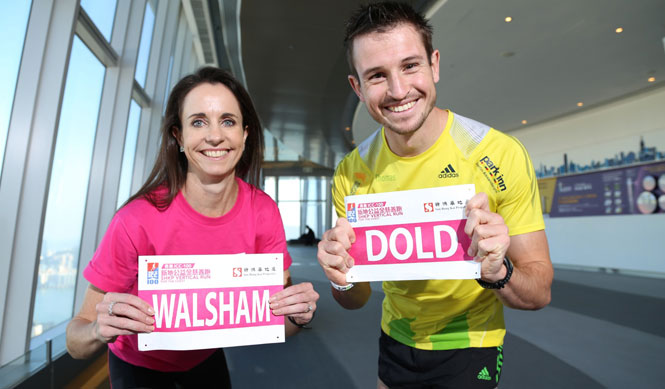 The 2013 Vertical World Circuit – after six races spanning three continents – will hold the grand finale in Hong Kong on December 1st with the “The Race to ICC – 100 – SHKP Vertical Run for the Chest”.

Anticipation mounts for the skyscraper racing circuit’s final round as the world’s top athletes gather in Hong Kong to compete for the Vertical World Circuit title and prizes, Sunday, December 1st. The selected venue for this prestigious event is the International Commerce Centre, the tallest on the circuit at 484 metres high and the tallest in Hong Kong.

Facing the extreme challenge of racing up the 2,120 steps will be more than 1,000 runners together with probably the biggest concentration of elite runners in any tower running race to date. The standing records set here last year, 13’20” by Gi Ka Man and 19’42″by Cynthia Reid, with nearly 30 of the world’s top skyscraper racing specialists, are forecast to tumble.

Reigning VWC world champions, Thomas Dold from Germany and Australian Suzy Walsham will compete for the final points in the seven-race circuit. Both athletes are multiple winners of the Empire States Building Run-Up, the most famous skyscraper race. Australian Mark Bourne currently leads the ranking after winning in New York, Tapei and Singapore. A second place is all he needs for his first VWC world title.

Dold, four times VWC champion, will have to battle to defend his title with just three races behind him. If he wins, and Bourne is fourth, the title will be his. However, even a third position by Bourne will assure him victory. In the mix, are Poland’s super-strong Piotr Lobodzinski  ranked second, and Belgian Omar Bekkali in third position.

The women’s world champion, Suzy Walsham, is unchallenged and can count on the title and prize after five straight wins in New York, Basel, Beijing, Hanoi and Singapore.  Needless to say, she is Sunday’s race favourite too.

Second ranked woman, Melissa Moon from New Zealand can easily maintain this position in the final ranking here after accruing points in three races.  Race day competition will probably come from new entry, Gan Xue from China, who beat her for second place in Beijing. With just one race behind her, she will not represent a challenge on the circuit, which counts the best results of four races plus 20% extra at the final.

2013 VWC Ranking
“The Race to ICC – 100 – SHKP Vertical Run for the Chest” will indeed represent the culmination of a year’s racing by the world’s elite runners participating in the circuit and create a thrilling “grand finale” for this iconic event set to make its mark in vertical running.

Teams and individual local runners will also climb the tower, the proceeds of which will go to child and youth services charities.

In choosing Hong Kong as the 2013 VWC final venue, the International Skyrunning Federation, which sanctions the VWC, is confident that the event will be a resounding success.  Representing the ISF at the event will be VWC General Secretary, Michel Hodara from Switzerland, who will present the trophies and medals to the winners.  “I’m thrilled to participate in this extraordinary event which not only benefits an important charity but helps to create awareness of stair climbing in the fight against obesity and promote fitness. A sport for everyone, vertical running represents a potential Olympic discipline which the ISF is actively developing,” he commented.