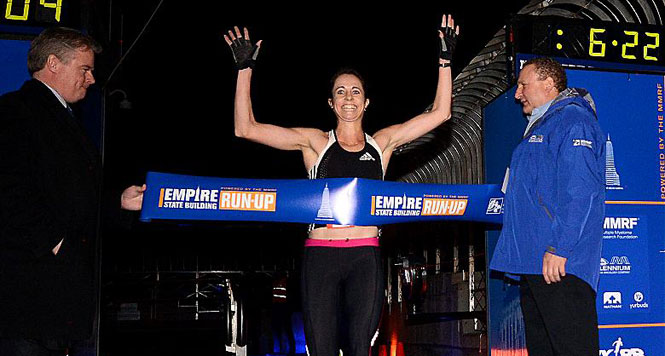 Six years on and the Vertical World Circuit announces the 2014 calendar.  Launching the eight-race circuit is today’s Empire State Building Run-Up in New York, where the world’s top ranked runners will toe the line for a challenge that translates into 1,576 steps and 86 flights of stairs to the observatory deck overlooking Manhattan’s night sky.

Australia’s SuzyWalsham, 2013 VWC Champion, has won the race no less than four times and her prowess goes practically unchallenged except for American Cindy Harris, another four-time winner who placed 5th last year.

Notable absentees from the line-up are 2013 VWC Champion and last year’s race winner, Mark Bourne from Australia and, Germany’s Thomas Dold. Dold has won the Emprire State-Building Run-Up a record seven times and was VWC Champion four times. Both are expected to participate in the rest of the circuit.

Australians, it seems, have a special talent for vertical running, headed by Paul Crake, now retired.  He still holds the race record set in 2003 (along with many others): 9’33” – a record that has stood the test of time and talent.  The equally strong women’s record dates back to 2006, set by Austrian Andrea Mayer in 11’23”.

The 2014 calendar counts three new venues in the eight-race circuit and reconfirms the highly successful Race to ICC 100 in Hong Kong as the ‘grand finale’ where the VWC Champions will be crowned on December 7. The ranking is based on the best four results.

Eight races stretch across the globe, zigzagging from New York to Taipei, from Paris and Benidorm to Beijing and Brazil before returning to the Far East in Shanghai and closing the circuit in Hong Kong.

High altitude, whether in the mountains or the city, is the arena of the International Skyrunning Federation (ISF), which governs, promotes and sanctions skyrunning (high altitude mountain running) and skyscraper racing worldwide.

The vertical running trend is taking off around the world so look out for the winners and the next stages of the exciting 2014 Vertical World Circuit calendar.