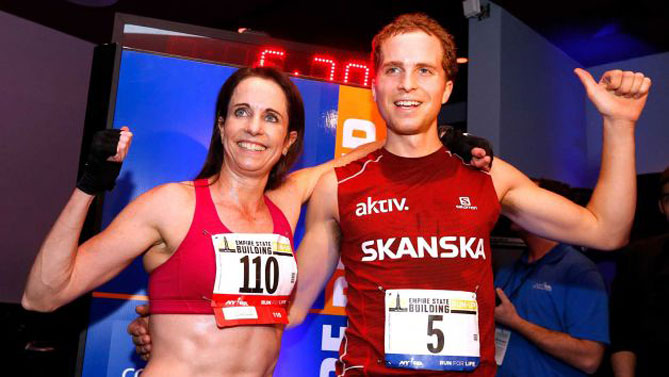 February 6, 2014
It was a glorious win yesterday evening for Australian Suzy Walsham at New York’s Empire State Building Run-Up – her fifth in fact. Walsham has been racking up more wins in skyscraper races faster than any woman on earth. In December she was crowned Vertical World Circuit Champion for the third time after winning six out of the circuit’s seven races.

The men’s winner was 25-year-old Norwegian Thorbjørn Ludvigsen who placed second here last year.  Ludvigsen is a new talent not only in skyscraper racing but on the Skyrunner® World Series circuit where he’s already competing with the world’s top runners in gruelling mountain races.

Their times?  10’06” for Ludvigsen and 11’57” for Walsham, still leaving the incredible long-standing records of 9’33” and 11’23” intact.  Due to bad weather, the race was halted inside the building, accounting for one of the best times in the 37-year-old history of the race. Ludvigsen climbed the 1,576 steps at a speed of approximately 1,900 m/h.

Last year’s race winner, Mark Bourne from Australia and Germany’s Thomas Dold, seven-times winner of the event, did not race yesterday. Look out for them in the next races on the 2014 Vertical World Circuit published yesterday.

Eight races zigzag across the globe from New York to Taipei, from Paris and Benidorm to Beijing and Sao Paolo before returning to the Far East in Shanghai and closing in Hong Kong on December 7.