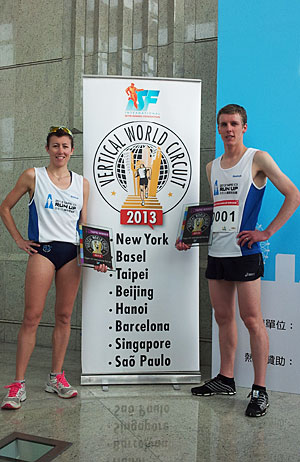 The world’s best vertical runners will be hitting the stairs on Sunday for the Taipei 101 Run Up, where thousands of participants have registered to conquer the world’s fifth tallest building at 509m.

The Taipei 101 Run Up has been selected as an official race for the 2014 Vertical World Circuit (VWC), the world’s premier skyscraper racing circuit, uniting some of the most iconic skyscraper races, including the Empire State Building Run-Up in New York City. Runners participating in the VWC are assigned points based on their results. The top ranked male and female will be declared VWC World Champion and win a cash prize and benefits at the final of the eight-race series in Hong Kong in December.

Among the athletes who’ll be on his heels on Sunday morning is New York runner-up Darren Wilson of Australia, Poland’s Piotr Lobodzinski and Belgium’s Omar Bekalli.

The women’s race is as strong with defending champion Valentina Belotti, assuming the mantle of pre-race favourite. The Italian, is a former World Mountain Running Champion.

Her main competitor should come from Antonella Confortola, reigning European Skyrunning Champion. Confortola, a cross country skiing bronze medalist at the 2006 Winter Olympics, is no stranger to running in Taipei, coming second last year and looks ready to chalk up a good time in what will be her first vertical race of 2014.

“The quality of the international field that turns out every year for this event is a sign of how well regarded it is,” said International Skyrunning Federation’s David Shin. “These athletes are among the most exciting in the sport, not only with their fast times, but with their proven ability to win on the biggest races in the world. We have two defending champions in Bourne and Belotti. They are the ones to beat, but they’ll have their work cut out for them against deep competition.”

Celebrating its tenth anniversary, the Taipei 101 Run Up will host more than 4,000 participants from more than 20 countries around the world.

Shin adds, “Taipei is the biggest race in terms of participation and prize money on the Vertical World Circuit. We are looking forward to celebrating that, and I am sure the elite field will put on a great show for everyone in Taiwan and show what top-end vertical running is all about.”