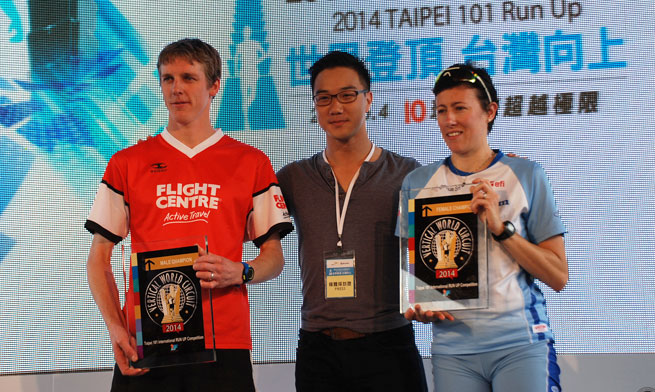 Winning the event is Bourne’s first outright victory on this year’s eight-race Vertical World Circuit, earning him 100 points on the men’s ranking and putting him side-by-side with Norway’s Thorbjorn Ludvigsen, who won the first leg of the Series in New York’s Empire State Building Run-Up in February. The 30-year old Australian finished in a time of 10 minutes and 54 seconds.

“It was very hard as usual, but I’m happy with it. I ran a similar time to last year so I can’t complain with that,” Bourne said. “There are some interesting races on [the Vertical World Circuit] this year so I’m looking forward to it and hopefully gaining some more points.” he added.

Winning his third straight race in Taipei, the Australian raised his arms as he crossed the finish line and then collapsed on the floor with exhaustion.

In the female  division, Valentina Belotti climbed to victory, finishing in 13 minutes 32 seconds, 17 seconds ahead of Australia’s Alice McNamara. Antonella Confortola, also from Italy, came third in 13 minutes and 42 seconds.

“I am very happy to win here in Taipei today because I have been training hard for this race.” said Belotti. “It is one of the most iconic races in the world and winning it gives me a special feeling.”

Each winner received a prize purse of 200,000 New Taiwan dollars.

Celebrating its tenth anniversary, the Taipei 101 Run Up hosted more than 5,000 participants from 39 countries.