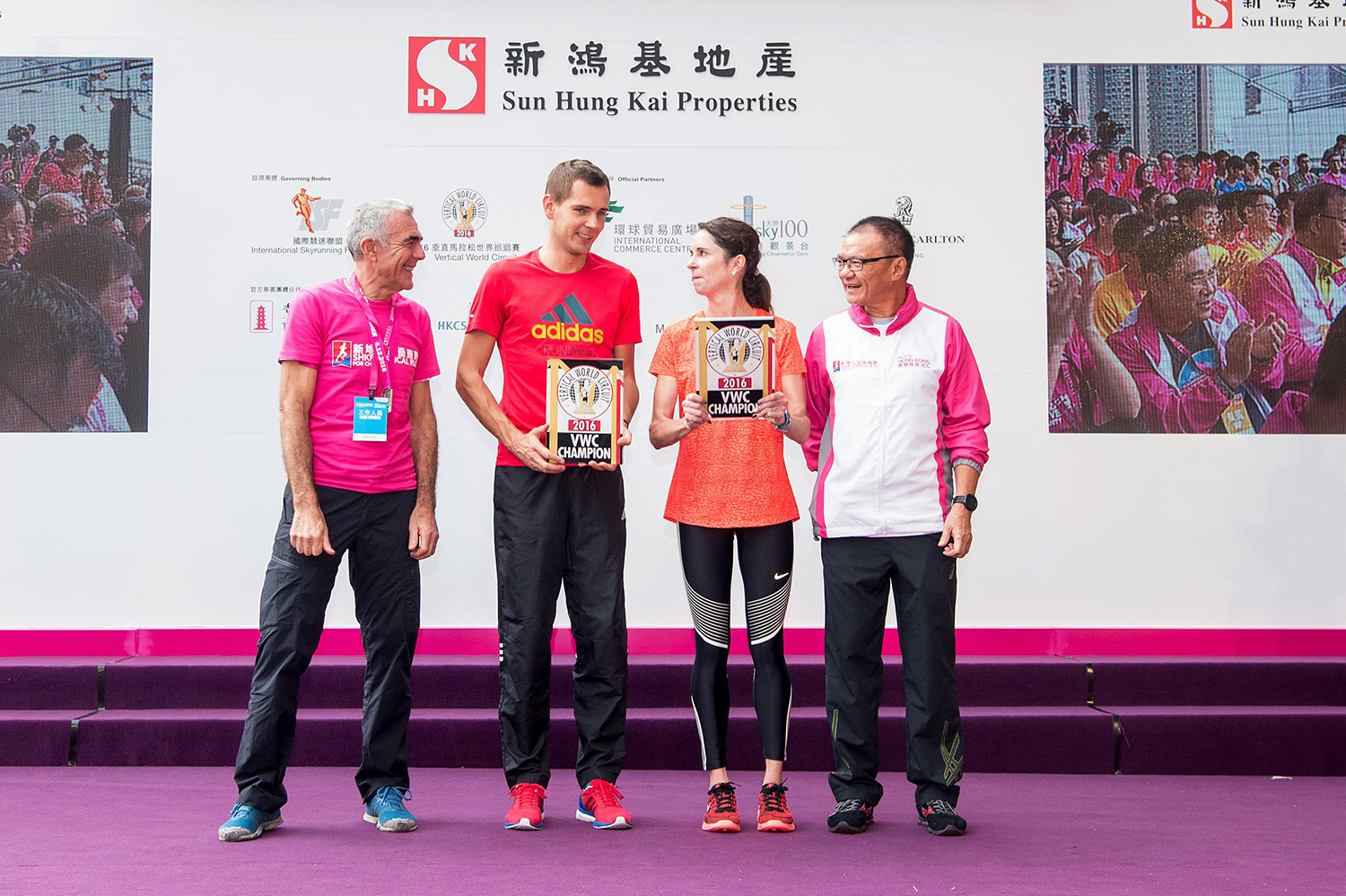 Sunday, Suzy Walsham and Piotr Lobodzinski were crowned Vertical World Circuit champions in Hong Kong at the Grand Finale of the nine-race tour. The race winners were Australian Mark Bourne who closed in 12’12” and Walsham, in 14’25”, who also took the title – for the fifth consecutive time.

A record 1,800 competitors from 34 countries raced up the 2,240 steps to the summit of Hong Kong’s tallest building in the SHKP Vertical Run for Charity: Race to Hong Kong ICC.

“I’m very satisfied,” commented Lobodzinski. “I improved my position from third to second. I’m VWC Champion for the third time in a row.  I didn’t improve my time, but happy to be on top!”

Bourne now ranks second on the circuit and Italian Emanuele Manzi, placed third in the race and the ranking. Bourne remarked, “I’m very happy to come back and win. It’s my fourth consecutive year. I won the first year, was second twice and now I’m back on top, that’s good. Probably it was a harder day to focus and I wasn’t feeling very fresh before, but just worked myself into the race and wanted to finish strong. It’s just a great end to VWC 2016. I always like coming back to Hong Kong. Looking forward to some rest now!”

The women’s podium was all-Australian with the invincible Suzy Walsham on the top rung. Second was Alice McNamara and Brooke Logan placed third. McNamara takes the second spot in the final rankings and Czech Lenka Svabikova, third.

“I was unfit the last two weeks and worried about going into the race,” said Walsham. “I tried to take it a bit conservatively as I’ve had elevated heart rate all week which doesn’t help in this kind of  race, but I managed to hold on and keep focussed. I’m very happy to win!”

The VWC Grand Finale awarded the World Champion Titles together with HK$ 100,000 end of season prize purse to the top-ranked VWC competitors.

The VWC ranking is based on the best five results out of the nine-race tour, with an extra 20% points awarded at the final.

Sun Hung Kai Properties, a leading property developer in Hong Kong, opened a new chapter in the city’s stair-climbing history when it staged the first vertical run in 2012 at their landmark International Commerce Centre. At 484 metres, it is the highest skyscraper on the circuit and the city’s tallest building.

For the fourth consecutive year, SHKP has partnered with the Vertical World Circuit which is sanctioned by the International Skyrunning Federation. This year saw an increase of 200 entrants over 2015, reaching a record 1,800, underlining the success of the collaboration and the growing popularity of skyscraper racing,

Doing the honours on stage was Mike Wong, SHKP Executive Director and Deputy Managing Director who was joined by Marino Giacometti, ISF President, who presented the trophies to the champions. Giacometti, as well as many SHKP executives, sponsors and corporate teams, took part in the challenge.

The nine-race circuit has crossed the world, touching on some of the tallest towers in four continents – New York, London, Paris and Dubai, Sydney, Manila and Beijing, Shanghai and Hong Kong.

A VWC exhibition race will be held on December 11 in Osaka, Japan, the Harukas Skyrun  where already 1,000 athletes are registered together with top Japanese skyrunners and international elites. The event will close the season before the new 2017 Vertical World Circuit is announced.