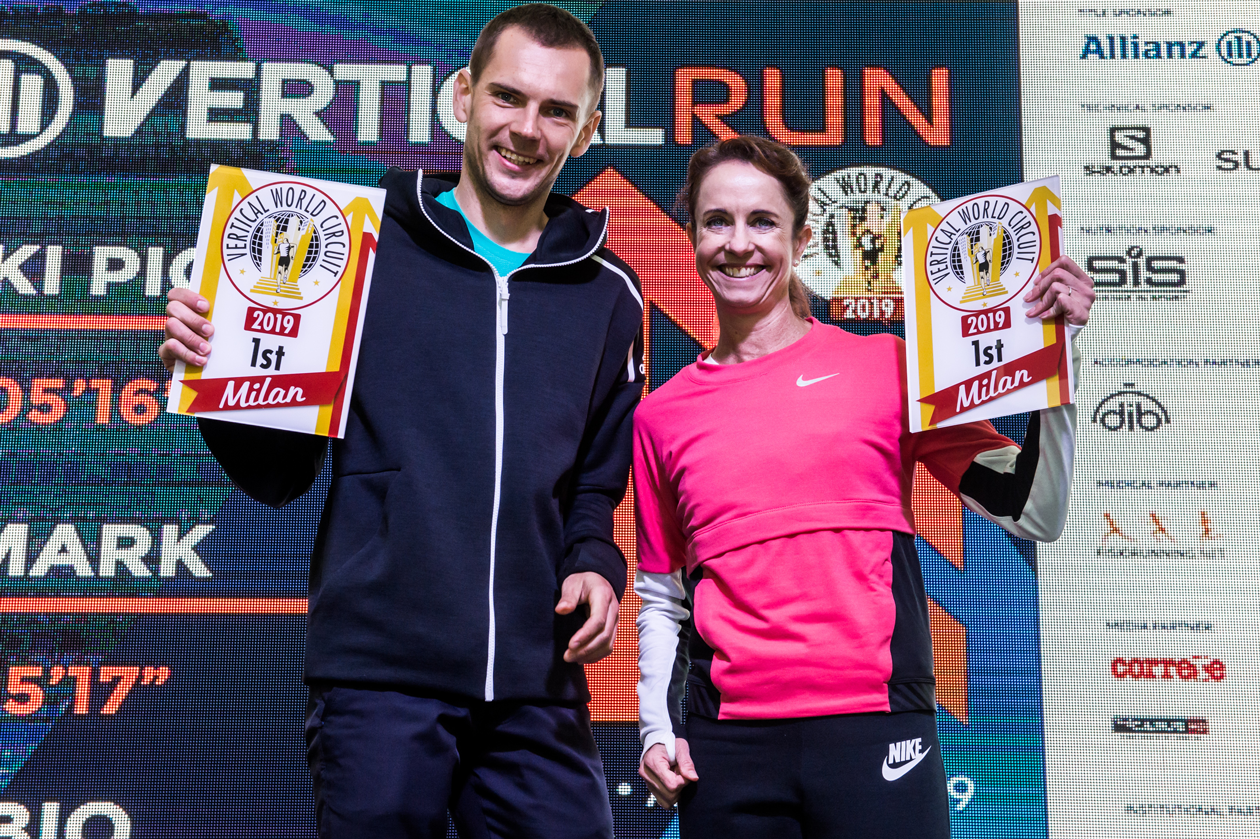 Winners Lobodzinski and Walsham take the first Allianz Vertical Run in the VWC. ©AllianzWith the world’s top athletes congregating in Milan for the second stage of the Vertical World Circuit®, jaw-dropping performances were in order. The second edition of the Allianz VERTICAL RUN held on Sunday, April 14, saw some 500 athletes from 22 countries take to the stairs – 1, 027 steps, 49 race floors and 200 metres inside the Allianz Tower.

Those 1,027 steps were eaten up in just a few minutes, breaking the previous records set in last year’s first edition of the race by 16 seconds for men and 32 seconds for women.

The new records were set by Piotr Lobodzinski from Poland in 5’16” and 6’12” by Australian Suzy Walsham. Only a fraction of a second separated the men’s winner from Australian Mark Bourne, who closed just 0.7” behind Lobodzinski.

Lobodzinski, five-time Vertical World Circuit® champion and fresh from last week’s win in the circuit’s first race in Seoul, stated, “I was feeling good, but inexplicably I didn’t run 100%. My heart rate was slower than during training, so I definitely must come back next year and try to slice some more seconds off my record,” he said. “When I don’t give all I’ve got I’m never happy, but a victory is a victory, so I’m not unhappy!” 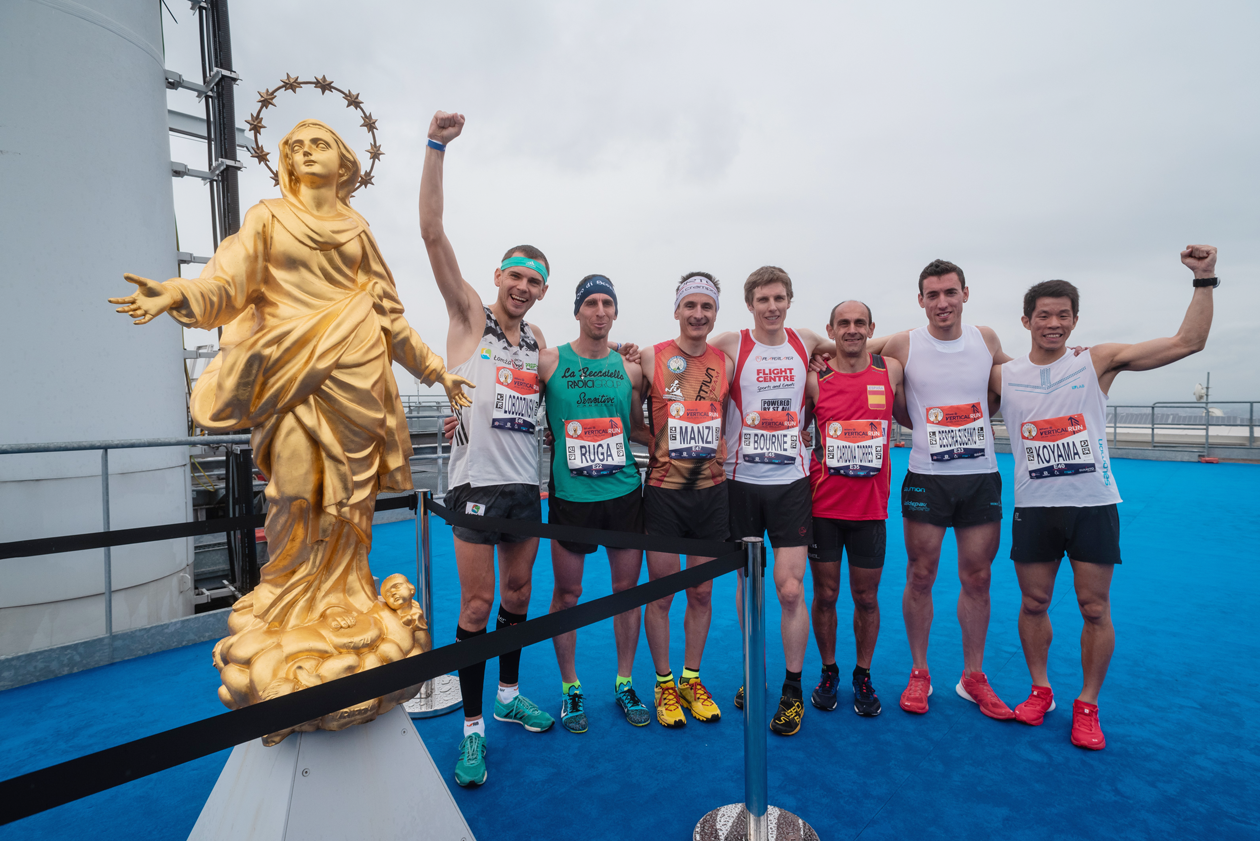 Top runners celebrating with the “Madonnina” on the summit of Allianz Tower. ©Allianz

After Bourne’s second place in Seoul and his excellent performance here, he said, “I enjoyed having the shorter race up the Allianz Tower. It was an intense effort and of course it’s a bit disappointing to be so close to the win. Anyway, again I’m happy with my form and will now look ahead to the next leg of the VWC in Ho Chi Minh City less than two weeks away.”

Closing the podium was Italian Fabio Ruga, who, after a break from the circuit, is again performing well with a finishing time of 5’21”. The top three men all finished under last year’s record time.

Australian Suzy Walsham, seven-time VWC champion, is used to topping the podium and that’s where she was yet again, victorious, after her second place in Seoul at the opening race. “I’m really happy about this win. I was aiming for points and I got as much as possible. Winning today was a great push for my confidence as I lacked training in the past months after a calf injury. Last week the race was long enough for the problem to come up and slow me down, whereas today I could run without pain and with a very good rhythm from the start,” she commented. “I’d love to come back to improve my performance and see the murals…running up you can only have a glimpse of it, otherwise you lose your step and fall down!” 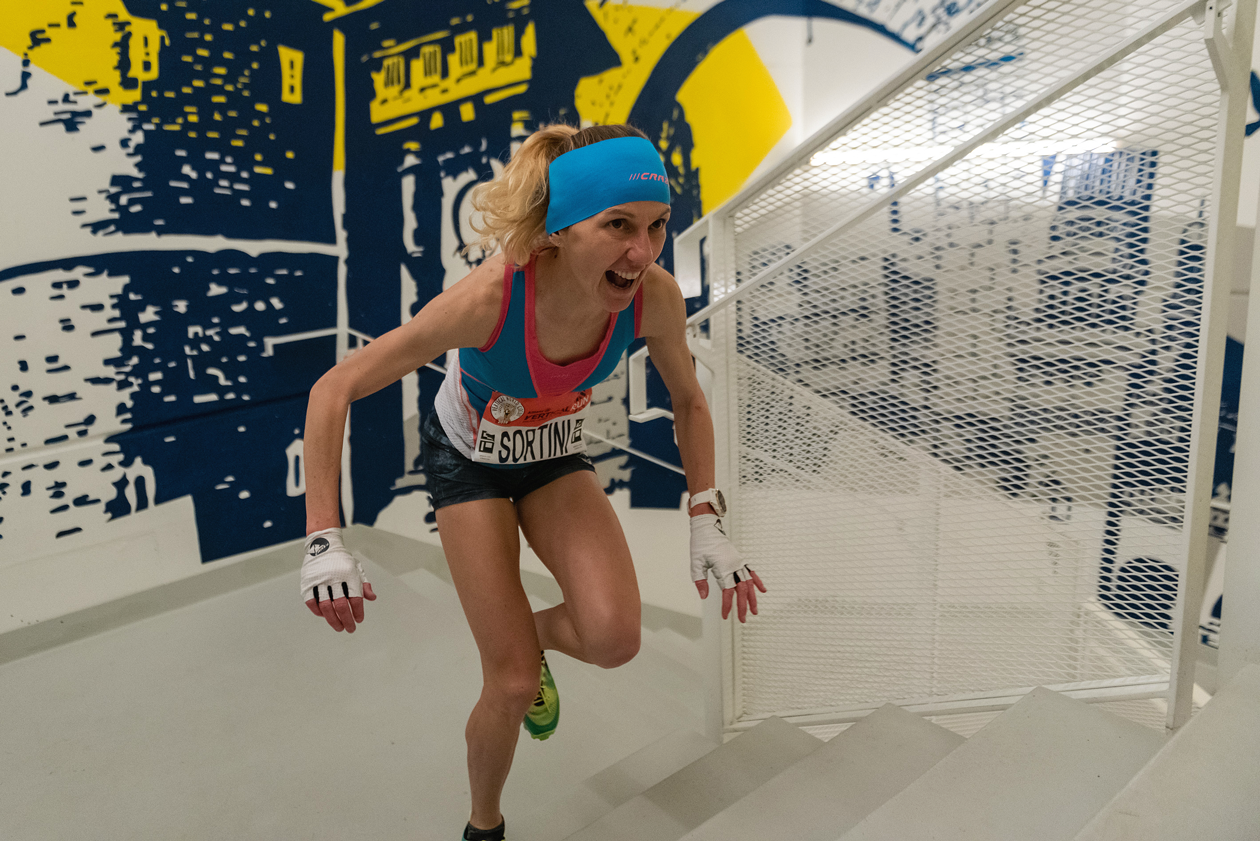 Italy’s Elisa Sortini on her way to the second place. ©Allianz

Strong Australians feature as always in this unique sport, but a growing number of Poles, as can be seen from the results, together with a very strong representation from Italy, starred on both the men’s and the women’s podiums. Top ten finishers competing in the VWC included Yuko Tateishi from Japan, Rosalyn Russell from the Philippines, Sarah Frost from the UK and Cristina Bonacina from Italy and Omar Bekkali from Belgium.

A field of 30 élite athletes from across the world attended this new race on the circuit to gain points in the VWC ranking, which awarded an extra 25% bonus points here.

The Allianz VERTICAL RUN is organized by Allianz Italy in their Milan headquarters, Allianz Tower, Italy’s tallest building for number of floors. Maurizio Devescovi, General Manager of Allianz Italy, stated, “We’re very pleased with the success of the Allianz VERTICAL RUN which this year is packed with important novelties. We included the Allianz Tower in the Vertical World Circuit® which attracted the best runners from around the world.”

The climb to the summit is accompanied by the world’s largest stairwell mural, a work of social art, where every floor represents a city and every ten floors, a new continent. 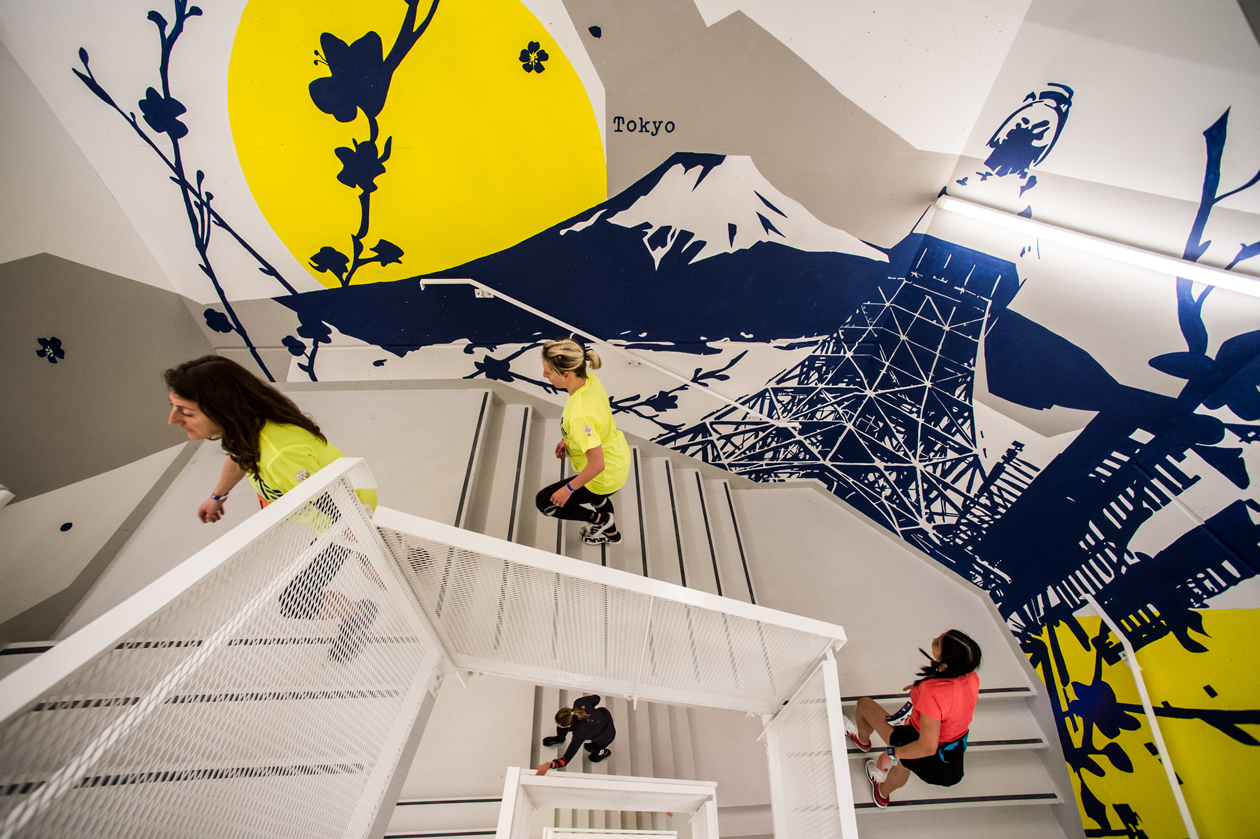 The mural painting accompanying all the runners in their climb. ©Allianz

The incredible performances of these athletes were measured in a new research study. In fact, the Allianz VERTICAL RUN marks a return to the origins of the Vertical World Circuit® which was first conceived in Milan’s Pirelli Tower in 2007 where the first scientific research was carried out. The new studies were carried out by the same authors, Dr Giulio Sergio Roi, director of the ISF Medical Commission in collaboration with Professor Alberto Minetti of the Department of Human Physiology at the University of Milan together with the Isokinetic Medical Group.

“The world’s strongest athletes of this discipline have given their consent to be monitored by the medical-scientific team. The results of the study will help to further define energy expenditure in skyscraper racing and furnish indications for training in this exciting new sports discipline,” stated Dr Roi.

The Allianz VERTICAL RUN also represented the first anti-doping tests (according to WADA protocol) to be carried out by the International Skyrunning Federation which sanctions and governs the sport.

Eleven races, the highest number to date on the Vertical World Circuit® calendar, stretch across the globe from New York to London, Paris and Milan in Europe, via Dubai in the Middle East and on to Asia, hub of the world’s tallest towers in Seoul, Ho Chi Minh City, Beijing, Shanghai, Osaka, concluding with the Grand Finale in Hong Kong.

Next race on the circuit is less than two weeks away on April 28 in Ho Chi Minh City, Vietnam, with the Vinpearl Luxury Landmark 81: Race to the Summit, a brand new race in a brand new building.  Another adventure begins.