All eyes on Dubai – the new VWC semi-final

The heat is on and the 2019 Vertical World Circuit® will head for Dubai, Arab Emirates, on Friday, October 25 for the ninth leg of the tour, the circuit’s new semi-final after the cancellation of the Grand Finale in Hong Kong due to the recent social events.

Just five days after the Shanghai stop-over, the world’s top skyscraper racers are ready to battle it out for ranking points at the Dubai Holding SkyRun.

For the third time, the joint venture between the International Skyrunning Federation and Dubai Holding bring the Vertical World Circuit® to the Middle East. The Dubai Holding SkyRun is the oldest vertical run in the UAE which boasts a 4-star ranking by the Dubai Sports Council, of which it is an official race celebrating the 16th edition after one year’s absence.

World champions Suzy Walsham and Piotr Lobodzinski will line up with some 430 participants from more than 50 countries together with elites in the VWC top-ten ranking who will fight for points.

The records for ascending the 1,334 steps and 52 floors of the Jumeirah Emirates Towers, respectively 7’09” and 8’16”, were set in 2017 by Walsham and Lobodzinski. “I’m very happy to come back to race in the Dubai Holding SkyRun,” commented Lobodzinski. “It will be my third time running up the Jumeriah Emirates Towers after 2016 and 2017 when I set the course record of 7’09”. My shape is good, so I hope to run a sub 7’ barrier!”

His confidence is high and his shape is good after last weekend’s second place in Shanghai, now placing him second on the ranking. Without ranking leader Ryoji Watanabe from Japan to push him, the rest of the podium lies open to Omar Bekkali from Belgium, Emanuele Manzi from Italy, Takaaki Koyama from Japan and Mikael Pourcelot from France – all ranked top-ten. 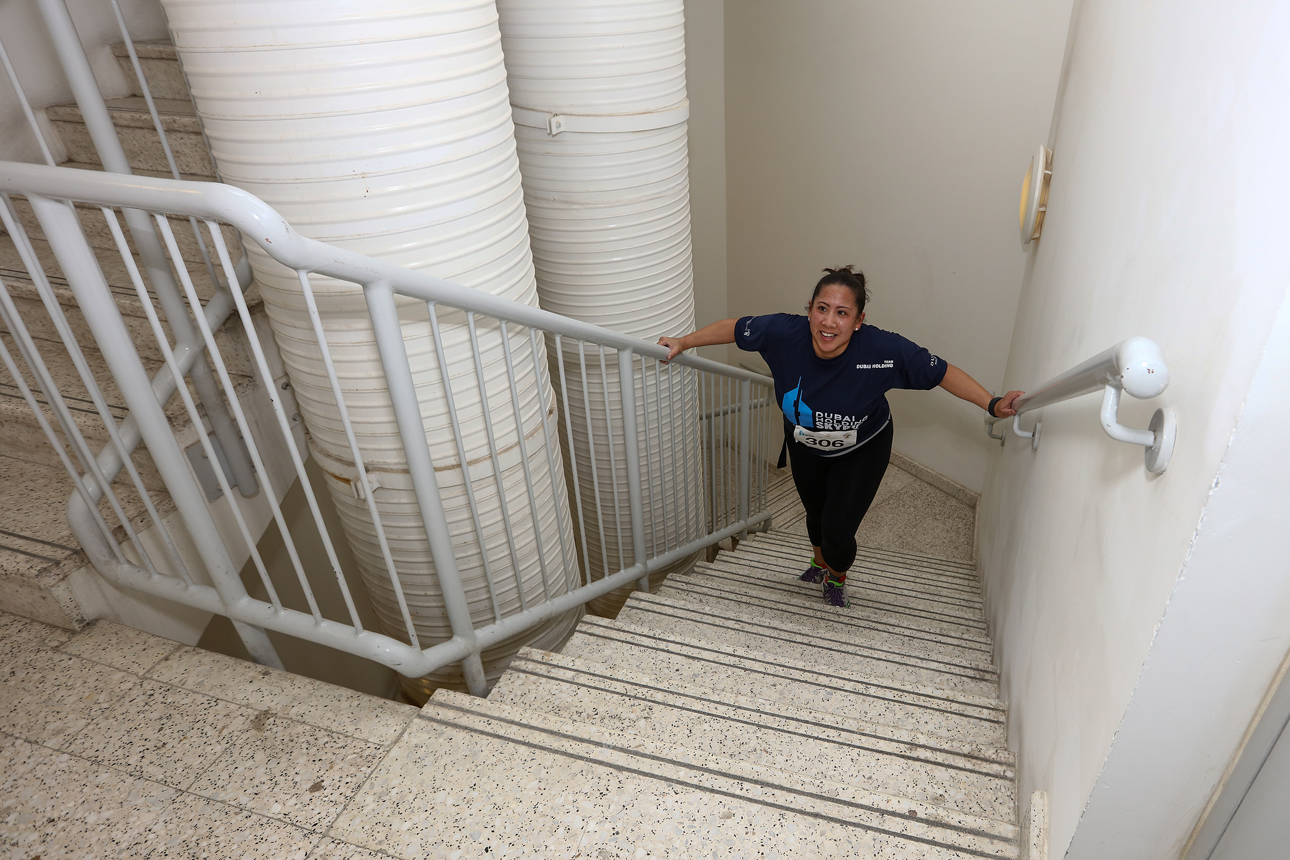 Walsham leads the women’s field. “I’ve always really enjoyed the Dubai Holding SkyRun so it’s great to have it back on the circuit this year. Although the race is only five days after Shanghai, I’ll hopefully have sharpened up and be ready to go again. I’m still chasing maximum points, so this race will be important for my overall VWC score,” she stated.

Laura Manninen from Finland has been climbing, and leading, the women’s ranking this year – right up until her second place in Shanghai behind Walsham last weekend. Manninen commented, “After the Shanghai leg, I found couple of things to improve for Dubai. I can hardly wait to make it the best run I ever had.”

Climbing the ranking is Sarah Frost from the UK, now in third. “Shanghai was a great race experience, but I’m aiming to improve on my fifth position finish in Dubai. I think it will be possible with adequate rest. Bring it on!”

Joining the women’s elite field will be Italy’s Cristina Bonacina, from France, Laure Chardin and Amandine Bertrand and, from China, Le Quingua.

A passionate vertical runner from Brazil is Orival Martins, 77-years old and still climbing hard, he has his heart set on competing in Dubai. He has participated in many of the Vertical World Circuit® races around the world including Sao Paolo, London, Paris, New York’s One World Trade Center and Seoul’s Lotte World Tower International Sky Run. He has climbed a total of 5 million steps and over 300,000 floors for which he trains, daily, 1,434 steps up 94 floors. “The anxiety and the chill in my stomach is inevitable for my participation in the Dubai Holding SkyRun. It’s my first race after Seoul in April, where I was awarded a Guinness World Records title,” said Martins.

Commenting on this year’s race, Marino Giacometti, president of the International Skyrunning Federation which sanctions the circuit, said, “We’re thrilled to have the Dubai Holding SkyRun back on the circuit. We’re very pleased to have our world champions and elite athletes participate here as an example of how high and how fast you can go in just a handful of minutes,”  and added, “Most importantly, we would like to reach out to the Dubai community to create awareness of the health advantages that vertical running brings. ISF research has proven that walking uphill, compared to the same exercise on level ground consumes up to 10 times more calories – a great weight-loss tool!” 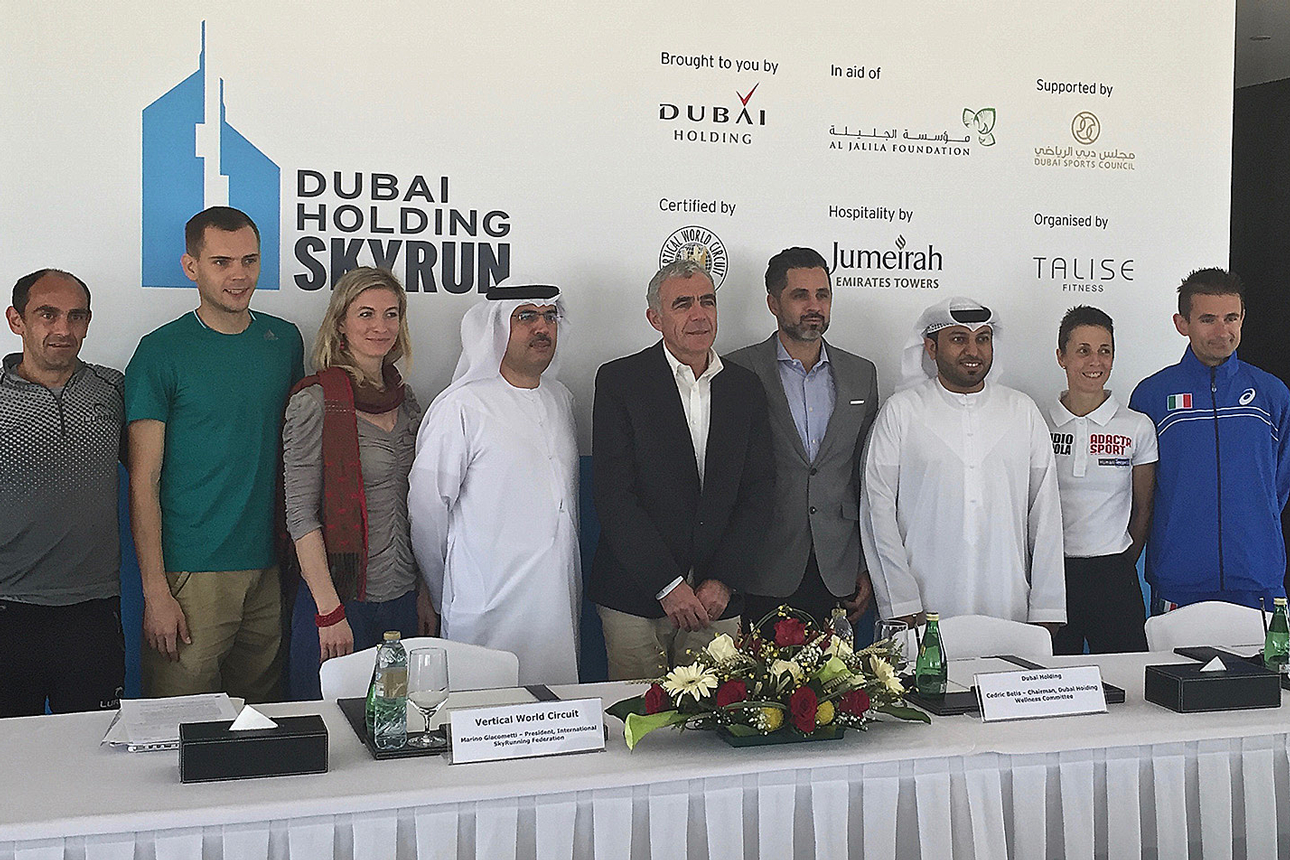 So, whether elite athlete, road runner, fitness freak, corporate team member, young or old, Friday’s Dubai Holding SkyRun has something for everyone.

Follow us on Facebook and Instagram for all the action and the results of the Vertical World Circuit® semi-final before the conclusion of the circuit in Osaka on November 10.